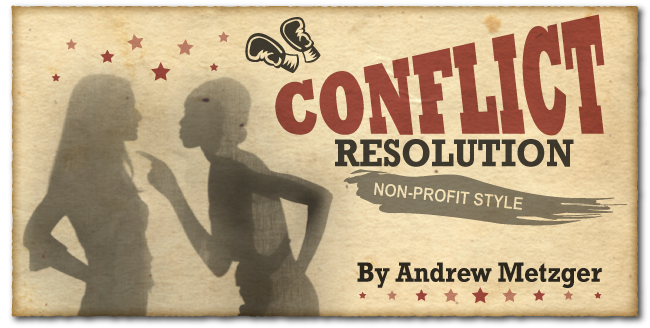 My first-hand and ongoing experience in conflict resolution stems from my years of service as a member of the board of directors for a Pensacola-based performing arts organization. The non-profit arena shares much in common with the business world, but there are also some differences. The primary difference stems from the reality that a fairly large group of volunteer board members serves as a non-profit’s ultimate authority—a kind of multi-headed boss, as it were. Staff and other volunteers answer to and function according to the dictates of the board and all major decisions are made through collaborative agreements reached among board members, generally at monthly board meetings.

In my experience, there are two primary kinds of conflicts that arise within non-profit organizations, both of which are detailed in the STS course.

The first of these conflict areas is described as “goals and aspirations.” When creating an artistic product for public consumption, a non-profit’s goals and aspirations incorporate such elements as programming decisions, performance standards, hiring of guest artists, collaborations and venue considerations. These elements must weave their way into and somehow find a balance with fiscal goals and realities, as well as an organization’s long-term mission. I don’t think it takes much imagination to visualize conflicts arising over these issues when fifteen volunteers are required to make timely decisions at monthly board meetings. Let me tell you – arise they do!

The second of these conflicts is described in the STS course with the single word “personalities.” Ah, personalities! The board on which I serve consists of members who serve primarily because they take part in the performing arts events themselves and those who serve primarily because they are members of the local business community. It’s amazing how, in the course of discussions, so many people can be “right” and “wrong” in so many different ways at the same time! Things can get somewhat tense and emotional, especially when people feel they must defend their turf and/or stand their ground.

So, just how do we survive these moments of conflict that threaten to derail progress and could even jeopardize the future of the organization?

Enter the best darn board president with whom I’ve ever had the pleasure of working. This highly intelligent, confident woman is both a performer and a member of the local professional community. She exhibits that deft touch as a leader that enables her to both participate in board discussions and simultaneously serve in that all-important mediator’s role when conflicts arise that cannot otherwise be resolved. She has the ability to impress her calm demeanor on the room and pull everyone together in ways that bring about compromise, agreement and resolution. I’ve watched her do it over and over again. Sooner or later, every non-profit organization needs someone like this.

I suspect our board president has never read the STS Conflict Resolution for Adults course, but I’d swear sometimes she has!

One Response to “View our Conflict Resolution Infographic and Blog Post”